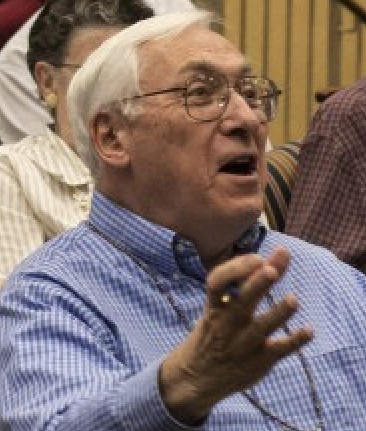 whose career included serving as a member of the Society of Jesus for 15 years and as a Jesuit priest for six years, a widely-respected international family planning expert for 30 years, a City of
Fairfax Councilman for three terms, and as an officiant of marriage for almost 50 years, died May 24, 2020 at the Ashby Ponds retirement community in Ashburn, Virginia. The cause of death was Alzheimer’s disease.

He is survived by Patricia Hemmer, his beloved wife of 51 years, their two children Christopher and Laura, six grandchildren, his sister Claire (Hemmer) O’Reilly, and sixteen nieces and nephews. He was predeceased by his sisters M. Virginia “Ginnie” (Hemmer) White and Beatrice (Hemmer) Crescenzi.

Carl was born March 7, 1932 in Syracuse, New York to Carl and Beatrice Hemmer, the youngest of four children. He graduated from St. John the Evangelist High School and attended Le Moyne College and St. Louis University, where he received a BA, PhL and an MA. He later received a Licentiate degree in Sacred Theology at Woodstock College.

He joined the Society of Jesus (Jesuits) in 1952. In the late fifties, he taught Economics at Fordham University and Boston College. He was ordained a Jesuit priest in 1962. His assignments included parish work in Mexico City; Salamanca, Spain; New Jersey; and Long Island, NY.

Carl believed that celibacy for priests should be an option and petitioned the Vatican — without success — for that permission. He left the Jesuits in 1967 and married Patricia Harris on June 15, 1968 at Columbia University, where he was studying for a doctorate in Economics.  He was a founding member of the National Association for Pastoral Renewal, a group of former priests who worked towards making celibacy optional in the Roman Catholic priesthood. With his wife, he coordinated the 1994 Corps of Reserve Priests United for Service (or CORPUS) Annual Convention, held in Northern Virginia. He also authored a chapter in “Why Priests Leave, The Intimate Stories of Twelve Who Did.”  (His chapter was called “A Priest Who Didn’t Leave”.) He also wrote a number of articles for CORPUS Reports, a monthly newsletter.

Carl served as the Chief of Policy Division and Branch Chief for Family Services Planning within the U.S. Agency for International Development (USAID) in the Office of Population Policy from 1968 until his retirement in 1998. By an unusual coincidence, the USAID job had him — a retired Jesuit priest — procuring condoms for family planning programs around the world. He also served as a United States delegate to the 1975 International Year of the Women Conference in Mexico City, one of only a handful of men to be selected. He received USAID’s Outstanding Career Achievement Award upon his retirement.

In 1969, Carl was licensed to perform marriages and officiated at almost 250 weddings for couples who wanted a personalized non-denominational civil ceremony. As he once said, “by making myself available for people, I can continue to do service.”

From 1978-1984, Carl served three elected terms as a City of Fairfax, VA Councilman. Among his accomplishments were his efforts to commence the CUE bus system which went from George Mason University throughout the City of Fairfax to the Vienna Metro.

He will be remembered for his intelligence, sense of humor, quick wit, and loving devotion to his many relatives. Upon his death, his body was donated to the Georgetown University School of Medicine’s Anatomical Donor Program following his wishes to be of service, even in death, to help train medical students.