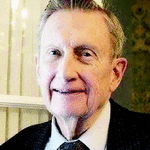 his home of 24 years in Sterling, VA. He was on born March 2, 1924 in Newfield, NJ and grew up in Glassboro, NJ– the son of Dorothy and Daniel Erickson.  Dan was survived by his wife of 63 years, Dorothy (Dot), his daughter Beth, son Jeff (wife Shelley), his grandsons, Rob and Jim and their wives and grandchildren.

Dan was Class President and Valedictorian from Glassboro, NJ High School in 1941 and started college at Rutgers, but soon left to volunteer in the US Navy during WW II.  He then returned to complete his undergraduate degree at Yale University in 1947.  He continued his education by attending the University of Pennsylvania law school (LLB, 1950) and NYU for international law (LLM, 1960). He retired as a Lieutenant Commander  from the US Naval Reserves on his birthday in 1984.

Dan was a corporate lawyer for Worthington Corporation (NJ) until 1967, when he established his own business– Resources Development Corporation (RDC). Wanting to utilize his education and his interest in international development, he became a lawyer for the Asian Development Bank (ADB), in Manila, Philippines in 1972 and formed the Association of Former Employees of the ADB. In 1976, Dan joined the US Foreign Service (USAID), serving in the Middle East, Africa, Pakistan and Cameroon. He retired from USAID at the age 65 and moved to Bridgeton, NJ in 1988 to be closer to his children and grandchildren, and moved again to be near them in Sterling, VA in 1996.

Wherever Dan lived, he was actively involved in/or forming Rotary Clubs. He was also an avid gardener, loved classical, patriotic and church music and was a faithful church member.