Dr. Davy McCall, 97, a true Renaissance Man, who made major contributions to historic preservation in Chestertown and Kent County, Maryland, was a distinguished teacher of economics at Washington College, a key figure in international development, and a supporter of low income housing, passed away on Sunday, at Heron Point. 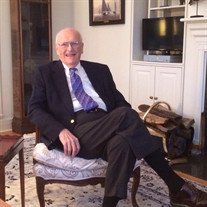 He was born in Shaker Heights, Ohio, and studied at Kenyon College graduating magna cum laude with honors in economics. He joined the US Army during World War II and was assigned to study Chinese Language at the University of Chicago in order to become an interpreter (should there be an allied invasion of Japan and China.) After the war, he entered the Chinese Regional Studies Program at Harvard University and received an M.A. Following Harvard, Davy taught economics for several years at Western Reserve University and served as an economist for the United States Agency for International Development in Washington, DC, and later for a private firm in Saigon, Vietnam and for the U.S. Operations Mission in Cambodia.

After his time in Southeast Asia, Davy returned to Harvard to complete his PhD. He then spent a decade at USAID/W and the Department of State in senior positions, dealing primarily with North Africa. He was then recruited by the World Bank and became the key loan officer for Spain, Morocco, and the Republic of Ireland. His work at the Bank widened, but he returned to USAID to senior positions in DC and in Syria. When Davy retired, he moved to Maryland’s Eastern Shore, where he admired the elegantly built 18th century plantation residences and townhouses of the era, particularly in and around Chestertown and Rock Hall.

Davy became president of the non-profit, Preservation, Inc., engaging in restoration of historic buildings and writing about Chestertown history, including on the African American community, and on John Bolton, a major figure of the Revolution in Kent County. He also taught economics for 14 years at Chestertown’s Washington College and became Chair of the Department of Economics and Curator of the Society of Junior Fellows. He was a member of the Historic District Commission of Chestertown, a board member of Preservation, Maryland, a Vestryman of Emmanuel Episcopal Church, a board member of Heron Point, a member of the Maryland Club in Baltimore, a Chestertown Rotarian and a strong supporter of affordable low-income housing in the Episcopal Diocese of Easton and in Chestertown.

Davy was beloved, admired, and respected, and until just a few days before he died, had a first class mind and extraordinary memory for detail, and a love of intellectual engagement. He was a person with old world courtesy, manners, and kindness to others. He will be much missed.

To send flowers or a memorial gift to the family of Dr. Davy Henderson McCall please visit our Sympathy Store.