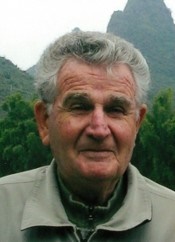 Francis Denis Light, known as Denis to friends and family, age 90, died on February 14, 2020 at his home with loved ones.

Denis was born in Tamworth, England, one of two children, becoming a civil engineer serving in the British Royal Engineers, constructing the famous sea walls. In 1957, he emigrated to the United States, meeting Elisabeth while working in Geneva, and marrying in Frankfurt in 1961. His children, Carolyn and Chris, were born in New Jersey while he was working for Louis Berger International. For work, he traveled in the US, Central and Latin America, Brazil, East Pakistan, and Mauritania. Later he served as a US foreign service officer with the US Agency for International Development including postings in Egypt, Kenya, and Zimbabwe, as well as frequent regional travel.

He was a friend to many, and his twinkling eyes, easy smile, and warm kindness were infectious. He loved to travel. As a young man, he bicycled from one end of the UK to the other. After retirement in ’95, he and his wife traveled throughout the world and nationally, often with friends from Canada and Florida. One of his favorite destinations was Myrtle Beach, South Carolina, where annually he took his children and grandson to relive the beach times of their formative years. He was known for his generosity and fidelity to God and country. He loved to talk about his family, current events, enjoyed hosting friends and family from all over the world, and was a voracious reader. Always a friend to animals, he delighted in being in nature, adopting shelter animals and caring for the neighborhood feral cats. In his later years, he lived in King Farm, Rockville, serving as a Stephen Minister and Mason.

He is survived by his wife Elisabeth, daughter Carolyn and grandson Devon, son Chris and daughter-in-law Heather, as well as many family members from England including sister Betty (age 92), numerous nieces, nephews, grandnieces, and grandnephews.