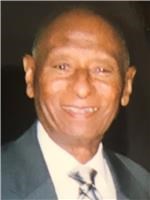 departed this life on Thursday, January 16, 2020, at the age of 93.  He was preceded in death by his wife, Myrtle Dapremont Blackwell, his parents,and five sisters and six brothers. He is survived by a host of loving nieces and nephews and will be fondly remembered by many colleagues, neighbors and friends.

Dr. Blackwell was a sociologist, educator and consultant who specialized in the study of the sociology and economics of the Black community and the desegregation of higher education institutions in the United States.  Long-time professor and chair of the Department of Sociology at the University of Massachusetts Boston (1970-1989), Dr. Blackwell focused his research on the structure of inequality within major social institutions, particularly in the areas of economics, professional marketplace, and education.

Dr. Blackwell was extensively involved in various professional organizations and was the first President of the Association of Black Sociologists (1970) and received the American Sociological Association’s Dubois-Johnson-Frazier Award in 1986.

He was born in Anniston, Alabama.  He received his Bachelors of Science and Masters of Arts degrees from Western Reserve University (1949) and his PhD in Sociology from Western State University (1959).  He held several university teaching positions, as well as a number of high level administrative positions throughout his career.

He was Deputy/Acting Director of the US Peace Corps in Tanganyika (Tanzania) from 1963 tp 1964, Director of the Peace Corps in Malawi (1964-66), and Director of the Division of Public Administration and Community Development for USAID in Kathmandu, Nepal (1966-69). In Nepal, he taught English and sociology at the University of Nepal in Katmandu.  He also traveled through the country working with the local population on community development programs, helped to relocate Tibetan refugees in Nepal, and was instrumental in sending 12 Nepalese college students to the US for training in community development and public administration for advanced leadership positions.  Until 1969, Dr. Blackwell divided his time and assignments between Tanzania, Nepal and Malawi.