The UAA offers a series of interactive conversations on a broad range of topics relevant to the interests of international development professionals. These are presented under the heading of UAA/DACOR and UAA Development Issues Committee Development Dialogues. Almost all sessions are available in audio form which can be accessed through the links provided below.

On September 16, the UAA and DACOR were delighted to have Henrietta Holsman Fore join us for an hour to discuss “From USAID Administrator to UNICEF Executive Director — Challenges and Opportunities.”In conversation with Alex Shakow and in a half hour of Qs&As with some of the more than 125 members in the virtual audience, she spelled out clearly the vast array of issues UNICEF faces every day around the world. It was inspiring to hear her high level of knowledge, passion, commitment, vision and insight on UNICEF’s current focus and its priorities for the future. View the video by clicking here  to hear her comments and responses.

UAA Development Issues with Andrew Herscowitz, CDO of the DFC

Zoom on August 27, 2020.  Our guest discussion leader was Andrew Herscowitz, Chief Development Officer of the recently created U.S. Development Finance Corporation (DFC), the successor to the Overseas Private Investment Corporation (OPIC).  Mr. Herscowitz, a Minister Counselor in the Senior Foreign Service, and formerly the Coordinator of USAID’s Power Africa Initiative, led a discussion of the origins of the DFC in the Build Act of 2019 and the accomplishments and challenges of the organization’s first nine months of operation.  He outlined the structure of the organization and the composition of the Board of Directors, one of whom is the USAID Administrator, and emphasized his mission to assure “development” remained a primary tenet of the organization.  He described DFC’s new screen for evaluating the merits of proposed new investments, called the Impact Quotient (IQ), which looks at a project’s potential to contribute to economic growth, is inclusive of women, minorities and those “at the bottom of the pyramid,” and is innovative.  He also emphasized close collaboration with USAID and noted that the Development Credit Authority had been transferred from USAID to DFC.

This was a highly successful first virtual meeting for the Development Issues Committee and the first large-scale meeting held by the UAA through its recently created Zoom account.  The meeting was open to all UAA Members who had made their 2020 contribution by July 31, and 61 members registered for the event–triple the number who normally attended the in-person meetings of the Committee at Arizona State University’s D.C. campus.  In all, 43 people participated in the meeting.  Holding a virtual meeting greatly expanded the ability of the Committee to reach a much wider audience, including a significant number of alumni outside the DC area.  The committee will look at ways to reach out to alumni outside the DC area or who cannot attend in-person meetings once the restrictions imposed by the coronavirus pandemic have been lifted.  The Committee plans to hold its next meeting in October or November.

On June 30, 2020 the UAA and DACOR held our first virtual Development Dialogue at DACOR. This unusual event, with an audience of over 100 from around the country, was required by the impact of COVID-19 and featured Gayle Smith, former AID Administrator and current President/CEO of the ONE Campaign and host, Alex Shakow.

While her main topic was “Attacking Poverty in a Rapidly Changing Global Environment”, she also answered questions for about 45 minutes on a wide array of subjects. While expressing deep concern about the impact of the virus and other discouraging developments (including at USAID), she also found important reasons to be optimistic and hopeful. See the video and hear her comments and responses to more than a dozen questions here.

On Monday morning, February 10, a large crowd of UAA and DACOR 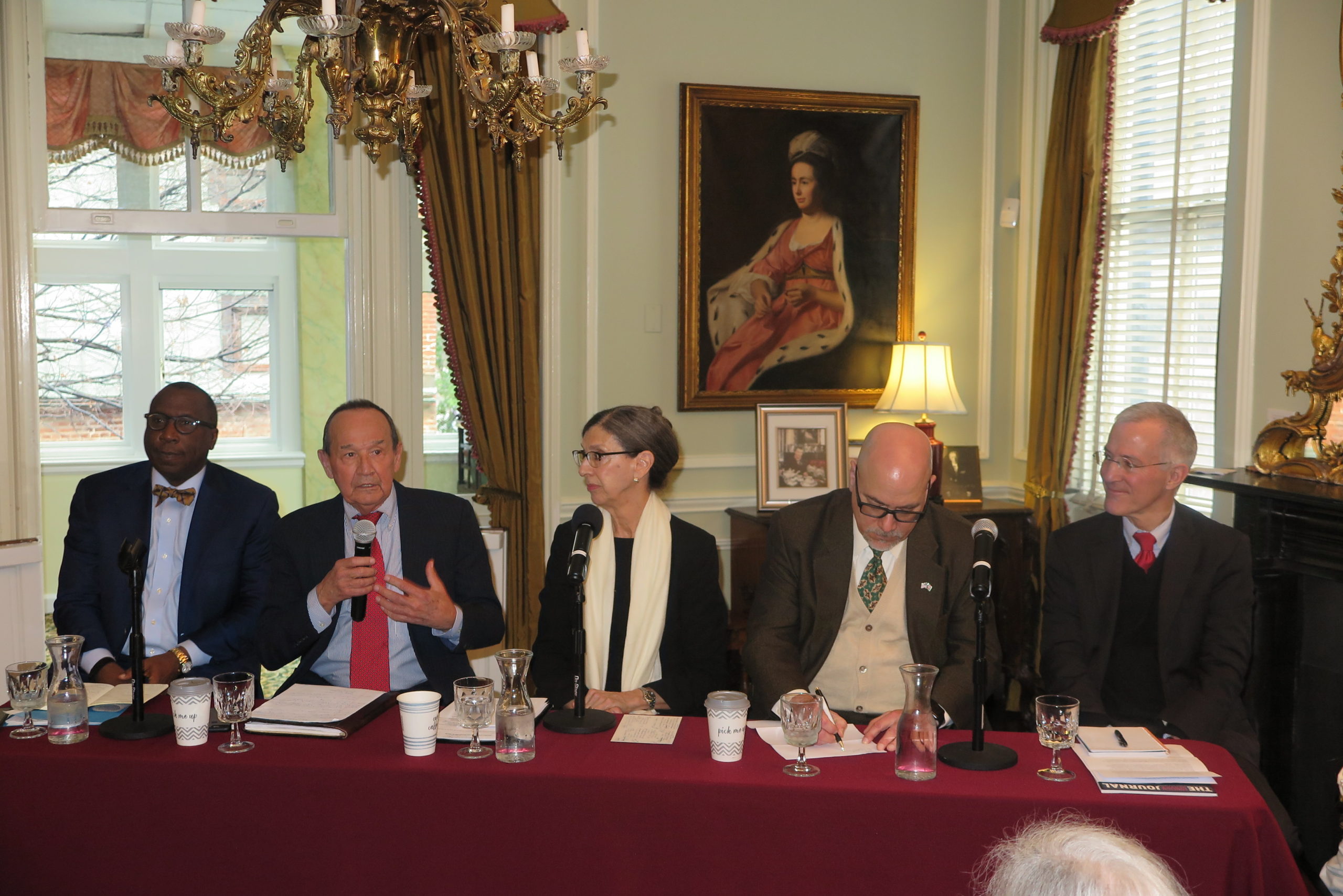 members were treated to an unusual and highly interesting panel discussion entitled “Afghanistan: Lessons Learned for America’s Future – Insights of USAID Mission Directors to Kabul”.  This panel, moderated by  Bambi Arellano,  was comprised of Craig Buck, Alonzo Fulgham, Bill Hammink and Skip Waskin, each of whom has had long USAID service elsewhere in addition to their assignments in widely differing circumstances in Afghanistan.  The focus of their comments was on lessons learned and their advice for others going into similar settings in the future.  Among their many suggestions, they noted how important it is, in conflict situations, for key staff to be able to work well in a complex, high profile inter-agency environment, including the ability t o make clear how USAID can contribute to U.S. policy objectives, what the Agency can do – and what expectations it cannot meet. They also stressed how critical it will be, before reaching their post, that future officers assigned to such environments spend some time to learn from the experience of their predecessors. [Note – To promote an open discussion this session was not recorded.]

Before a full-to-capacity crowd at lunch at DACOR on Wednesday,

January 29, 2020, Ambassador Eric Rubin, President of the American Foreign Service Association (AFSA), gave a wide-ranging talk entitled “The State of the Foreign Service and its Future”.  He detailed the many steps that AFSA has taken to improve services for FSOs while at the same time reflecting on the many problems and challenges the Foreign Service face and what needs to be done to address them. Listen to Ambassador Rubin’s talk and the discussion that followed by clicking here.

On Monday, October 7, David Beckmann, long-time head of Bread for the World, led a lively discussion exploring the reasons for the great progress made in recent decades, both in the U.S. and abroad, in reducing poverty and how we can help to insure that these advances are sustained. Hear David’s comments and the discussion that followed here.

To an overflow DACOR luncheon crowd on Friday, September 6, climate pioneer Rafe Pomerance described with great clarity – based on his more than forty years of leadership on this issue – the nature of the global climate crisis and the essential steps required to address it. Listen to the audio of his talk and the Q&A period here.

Before a capacity crowd at a luncheon meeting at DACOR on Friday, July 12, Liz Schrayer, President of the US Global Leadership Coalition, gave a spirited overview of her long experience leading the bipartisan efforts of the USGLC – a broad-based coalition of over 500 businesses and NGOs – to educate political candidates around the country and in the Congress about the importance of foreign assistance and US global engagement.   This UAA/DACOR Development Dialogue event drew many State Department retirees as well as UAA members, and we were also delighted to have the next generation of a USAID Foreign Service Officers, represented by the 2019 Payne Fellows, attend the event as well. To permit her candid commentary, Ms. Schrayer’s presentation and the Q&A period was not recorded.

On June 3, at DACOR, William “Bill” Reese, CEO Emeritus of the International Youth Foundation USA, engaged with an appreciative audience  on  “Addressing the Youth Bulge – Is it all about Youth?”  Reese, a very experienced NGO leader who was for nine years also head of USAID’s voluntary foreign aid advisory committee, emphasized why it was so important for the development community to help countries deal within this enormous challenge.  Listen to his talk and the discussion that followed here.

On Monday, May 20, before a large crowd at DACOR, Kristin Lord (CEO of IREX) and George Ingram (Brookings Senior Fellow) engaged in a wide-ranging discussion of “Where is Global Development  Headed?” based on their recent interviews with 94 of the sector’s leaders.  Their report – entitled “Global Development Disrupted” – contains lots of different answers and very little consensus, which made the session particularly interesting and thought-provoking.  Listen to the presentation and the Q&As and take a look at their slides.

On Wednesday, April 24,  at a UAA/DACOR Development Dialogue lunch, Anthony “Bud” Rock gave a highly informative and realistic presentation entitled  “Gaza from Within: The Challenges of Humanitarian Relief Efforts for Palestinians Today.”  Rock, a retired senior State Department officer and now the leader of  Global Water 2020, described NGO efforts to bring clean water to the people of Gaza and West Bank in  exceedingly difficult circumstances compounded by rapidly diminishing resources and the near elimination of U.S. aid.  Hear Bud’s talk.

At DACOR on April 1, Alex Dehgan took his audience on a fabulous tour of beautiful and isolated parts of Afghanistan as he described how he and his colleagues worked with Afghans at the local level to establish a national park and to preserve many different exotic species of animals and birds.  Deghan, formerly USAID’s Chief Scientist, has told many of these fascinating stories in his book “The Snow Leopard Project and other Adventures in War Zone Conservation.” Hear the audio of Alex’s talk and the Q&A here.

On March 11, Tony Barclay (inter alia, former CEO of DAI) provided a wide-ranging   and   highly   perceptive assessment of the evolution of the  USAID – contractor relationships  in  his UAA/ DACOR  Development   Dialogue talk entitled “How  USAID   and  the Contractor Community Should Adapt to a Changing Development Ecosystem”.  Listen to Tony’s talk and the Q&A’s here. 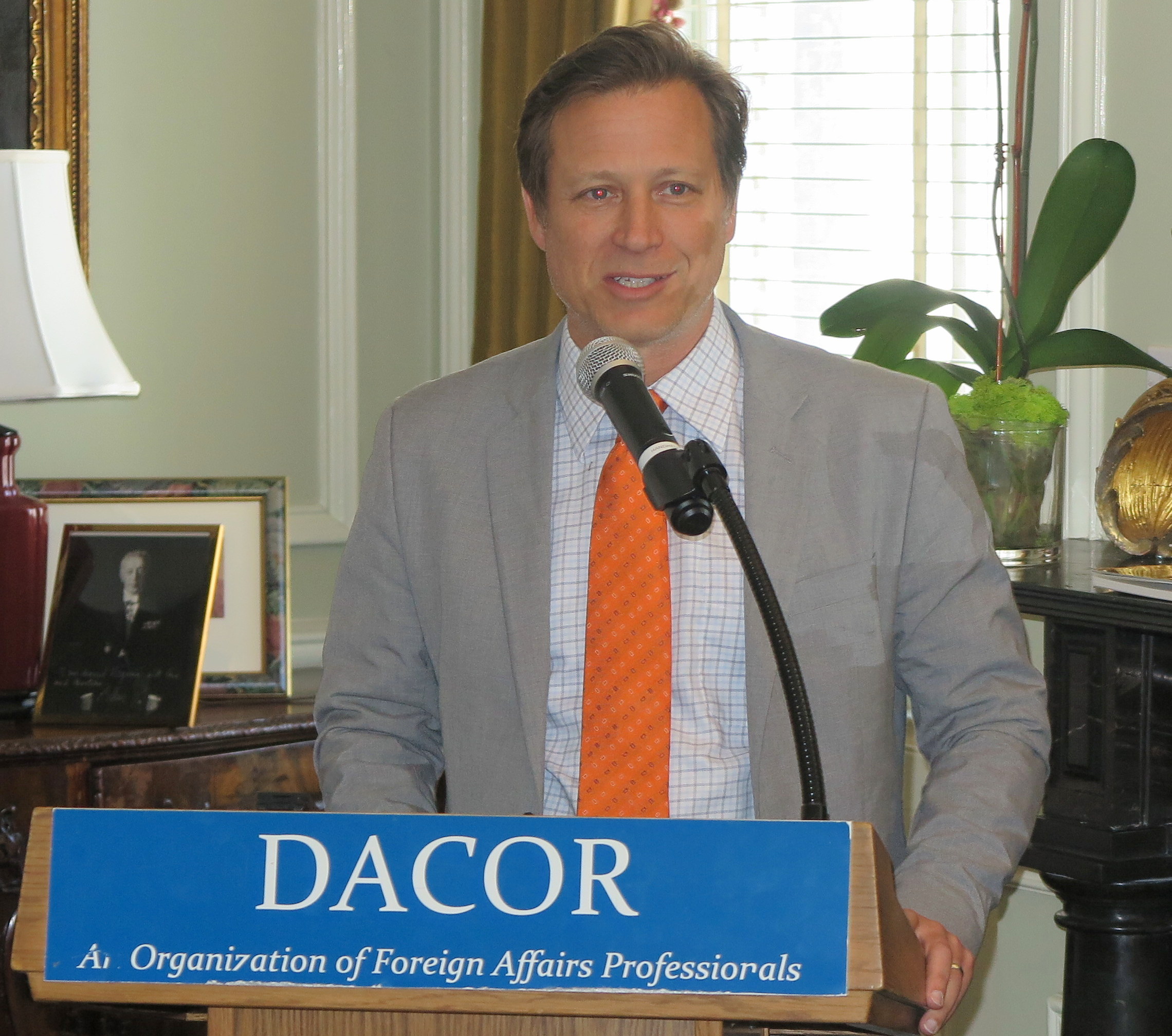 At a sold-out lunch on Tuesday, March 5, 2019, the UAA and DACOR honored Andy Herscowitz and the USAID Power Africa Team, 2018 winner of the prestigious Service to America Medal (Sammies) for National Security and International Affairs.  Joined by USAID Counselor Chris Milligan and other guests, DACOR President Jim Benson and UAA Co-Chair Chris Crowley expressed members’ great appreciation  for the team and our delight that its work had been recognized through this US government-wide award. Hear Andy’s talk about Power Africa and the Q&As here.

Andrew Natsios (before a meeting of the UAA Development Initiatives Committee)

On January 31, Andrew Natsios, USAID Administrator from 2001-2006, shared his views with a group of about 60 USAID alumni in a wide-ranging, candid, off-the-record discussion. This exchange took place at a special UAA meeting organized by the Development Issues Committee at Arizona State University’s Washington, D.C. headquarters. Over the course of two hours, Andrew led a dialogue with former USAID colleagues covering USAID’s role in global development, Congressional earmarks, the present state of the international system and global politics, migration and fragility, the emerging role of China, climate change, and more. Click here to read notes on the presentation.

On February 4, 2019, at a UAA Development Dialogue at DACOR, recently retired long-time President of the National Democratic Institute Ken Wollack gave a wide-ranging review of the state of democracy across the globe in his talk on “U.S. Foreign Policy and Assistance: Interests and Values”. Hear the audio of his presentation and the Q&A here and read the text of his remarks here.

UAA Development Dialogues prior to 2019 are available here.